Not diapers, but related...

My son will be having a GI scope series done next week.  Well, that also happens to be his first week at a new school.  The scope will be the second day, so he has to miss that, but I didn't want him to also miss the first day due to his "clean-out."  So, I added a little bit of protection to his undies.  I wouldn't want him to end up "the boy with the poop-stained pants" on his first day of school incase he leaks a bit.  ;) 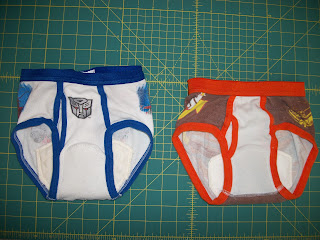 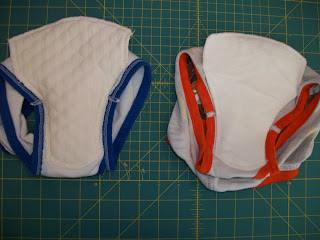 I basically made a PUL-backed pad sewn in only at the front so they don't affect the stretchiness of the briefs.  The starting pair is one layer heavy bamboo fleece and one layer zorb 2 for absorbency.  The secondary pair (in case he soils the first) is just 2 layers heavy bamboo fleece.  He will only be at school for 2.5 hours, and there is a bathroom VERY close to his desk (and the teacher knows he'll need unlimited bathroom privs that day).  So, I think/hope he'll be ok.  ;)

My son tried them on and says they're comfortable.

Arfy
I am a stay-at-home crafty mom of two.